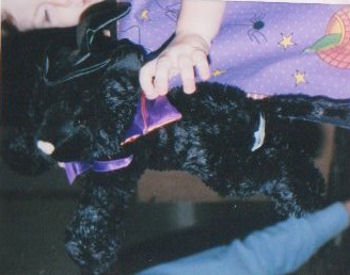 My son had a cat that originally came from Avon as a Halloween gift from Gramma when he was a year old. It came with a cape and witch hat on, but after the holiday we took them off, and the simple floppy cat became his lovey. He is about 8-12 inches long from end to end (think he was probably longer when we lost him than when new, as he got rather stretched in the middle). His fabric is a soft, furry black, which again was much silkier when he was new than when he was lost.

It has gone everywhere over the past 6 years, including being left at family’s and having to be mailed back to us.

This past week, he took it with us to see the doctor at Miami Children’s Hospital, and left it somewhere there (we think in the pharmacy). I spent the week (starting the morning after we were there) calling them to ask if it was found or turned in, and even going back to retrace our steps, but it has not turned up. I guess another child took it, or maybe someone even threw it away. It was pretty ragged looking, but to me was obviously a well-loved toy.

We are all in mourning over the loss. Many thanks for any help you can lend us.

If you can help Lori find this Avon Floppy Black Cat Originally with Witch’s Hat & Cap, THIS SEARCH REQUEST IS NO LONGER ACTIVELY MANAGED. Please use Our FREE FACEBOOK GROUP, including POST CODE #093009-4 in the subject