Thanks to Holly, we now know that this is George the Giraffe, from the 50’s or 60’s. He was sold as a fabric panel pattern, to be cut out, sewn, and stuffed. 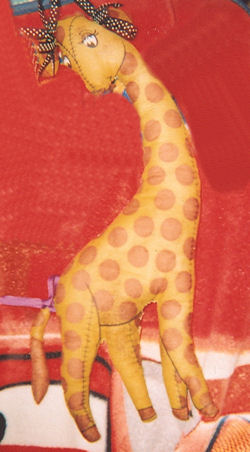 I was flea marketing in Indiana with my parents back in September, and I ran across a box of dingy, vintage stuffed animals. I was thrilled, as I love vintage plush!!

The one I especially liked was a bashful-looking giraffe pillow/stuffed animal. He reminded me of a character out of “Raggedy Ann” for some reason, but he was extremely dingy and full of holes!

So I bought him, took him home and gave him a good sink bath, patched him up, and now he looks fresh as a daisy! I even put little bows on his ears and tail! I decided to name him Burdorf (like the furniture store LOL). I know, I know, I love stuffed animals too much LOL!

Anyway, what I was wondering is, where do you suppose Burdorf came from? To look at him, you’d think he was sewn from some kind of pattern. At least that’s what I think. I’d extrapolate that he dates back to the seventies at the very latest. He looks rather cartoonish, but I don’t think he was from a TV show/movie or anything. And he’s not a Raggedy Ann character, even though he reminded me of one (I’m probably the only teenager who’s into Raggedy Ann LOL!). But I was wondering what you thought about it!

If you can help Peggy find any information about this 70’s? Giraffe Looking Pillow Animal, THIS SEARCH REQUEST IS NO LONGER ACTIVELY MANAGED. Please use Our FREE FACEBOOK GROUP, including POST CODE #110509-1 in the subject