This is the only picture that Kelly could find that looks anything like Bumbles. Bumbles is not quite so furry as this picture. Paws and feet are a little smaller too. She says the idea of this picture looks pretty close though. Bumbles has like a long, oblong, egg shaped head and small body. 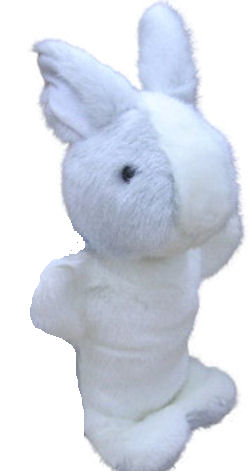 There is a very important rabbit that has been lost…twice… It started when my parents were first married in 1987, and they bought this purple stuffed rabbit made by Russ from a store called Payless (now Rite-Aid), and they named him Bumbles. He went everywhere with my parents before they had kids, and he became a family heirloom from then on.

When my grandmother was in the hospital for terminal cancer they let Bumbles stay with her. She passed away a few days later, and they threw everything that was with her into an incinerator (or so they were told), and they never saw him again.

More years went by, and I had kept him since my mom found him again. Then 2 years ago my father became sick, and I gave him the new Bumbles for comfort, just as he had given Bumbles to my grandmother. A couple of weeks later he had to be driven 3 hours away for treatment. They took Bumbles with them, and my 11 year old little sister was hanging on to him while he was with the doctor. Somehow, sadly, Bumbles was lost, and my little sister has no idea where.

My dad was heartbroken…Everyone was… This rabbit means so much to everyone in my family. I must find him…at any cost. Please help me! I cannot even find a picture of him anywhere… I’ve Googled for hours and searched everywhere, and I have never seen him or any rabbit like him. He does not quite look like a rabbit…Fuzzy little round paws and feet, a big fuzzy head with small ears, and like a felt, plush body. He is probably only 7 inches long, but I do not recall exactly…

Somebody please help me! Bumbles is priceless….:(

If you can help Kelly find this 80’s RUSS Small Upright Pink or Purple Rabbit, THIS SEARCH REQUEST IS NO LONGER ACTIVELY MANAGED. Please use Our FREE FACEBOOK GROUP, including POST CODE #111809-5 in the subject