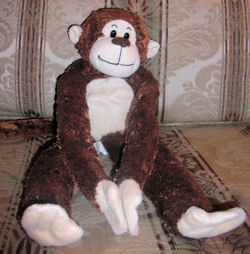 I am looking for a chocolate brown and beige Animal Alley monkey which has Velcro hands. It is approximately 22 inches from head to toe.

My 16 month old received this monkey from his grandmother when he was 11 months old. She picked it up at a yard sale, because we refer to our son as “Monkey”.

He has since become so attached to it! My son is hearing impaired, and it is often his comfort through the tests which he has to receive. He refuses to leave the house without it, dragging it through gravel, mud and dirt at my 9 year old’s football games, etc. He doesn’t like to sleep without it, either.

Due to the extensive attention the monkey has already had, we’ve had to have a few parts sewn already. I would like to find about 2 or 3 of these monkeys. I have searched and looked everywhere. I found the same exact monkey but light colored, but he rejects it, asking for “Banana”, which me have named his monkey.

Any help in finding this would be greatly appreciated!!

If you can help Christina find this 22 inch Animal Alley Chocolate Brown & Cream Monkey with Velcro Hands, THIS SEARCH REQUEST IS NO LONGER ACTIVELY MANAGED. Please use Our FREE FACEBOOK GROUP, including POST CODE #111909-5 in the subject