My mother recently found my musical dog. She found out how I am trying so hard to find a new one. Unfortunately, he was in a cardboard box full of books in the basement….that flooded. She hung on to him in hopes of finding me a new one, but she was without luck. His tag says that he is indeed a “Cuddle Wit” and on the sound box inside it says “1986”. He was ratty looking after years of love and play to begin with, but after being in a soggy cardboard box, when I picked him up, he literally fell apart. I was able to prop him up and get a few pictures before his arms and legs fell off. Poor him! I’m 31 years old and I still feel like he had feelings! 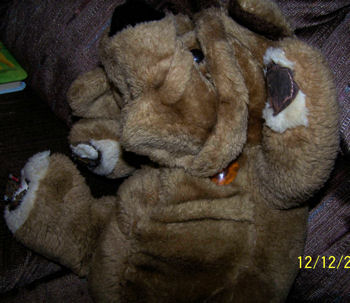 So, maybe someone out there might have one or with all the searching, may come across one. Keep me in mind. I would be very thankful!

The beige scarf isn’t in the picture because it was too nasty to touch. He has two little strings by his ears, I’m certain it was for a matching winter cap. In his day, he was quite a handsome fellow…the picture makes him look a little scary! Trust me, he was very cute!

PS I look forward to the day I can actually help someone find their missing toy! I may not get it right the first few times, but I will keep trying! 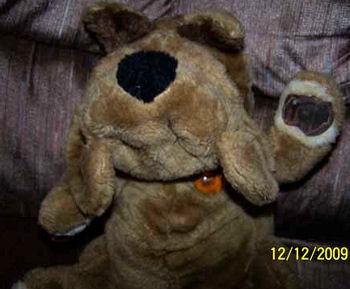 I am hoping you can help. I have been looking for YEARS to replace a plush puppy dog that would play music when you squeezed his paw.

He had a little orange-ish heart that would light up and blink to the music. I know he had a white/beige winter scarf on, but I’m not sure if he had a hat. I may have taken it off as a child. He was brown and had wrinkles–much like a “Wrinkles” dog puppet in looks. I think it was around 1986 that I got him from my mom. My mom was not sure if it was a mail order toy, or if it came from Meijer’s. Also, I do know he played “Do you know the Muffin Man”, “Three Blind Mice”, and “London Bridge”.

Around that time I also had a white polar bear with winter hat and scarf that played Christmas carols, made by Cuddle Wit. He is very much like that dog in the way the music is played and has a red blinking heart.

I tried a million times to find him myself online, but to no avail. Even just a picture – I would love to see him again!

Any help would be so much appreciated,

If you can help Cari find this 80’s Cuddle Wit Musical Wrinkled Brown Dog with Scarf & Blinking Heart, THIS SEARCH REQUEST IS NO LONGER ACTIVELY MANAGED. Please use Our FREE FACEBOOK GROUP, including POST CODE #120909-1 in the subject