The colors are NOT correct in this photo. 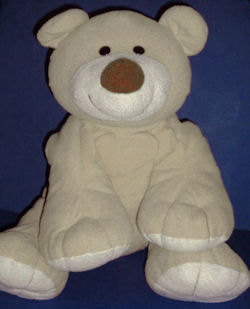 Bear-Bear has been my son’s best friend since he was one. He was a birthday gift to my son Silas from his sister. Ever since the day he came into our lives, the two of them were inseparable. Bear-Bear was so worn with love that he had been stuffed and re-stuffed a number of times.

On May 2, 2010 we took the redeye out of Honolulu heading to Los Angeles. Silas and Bear-Bear were afraid of the turbulence, so they hid under an airplane blanket and eventually fell asleep. When we arrived, we were all very groggy and left the plane after doing a once over to make sure we didn’t forget something. The only problem is we didn’t see Bear-Bear covered up in the blanket, and we haven’t seen him since that day.

We have tried with no luck to find another Bear-Bear, but it seems that Animal Alley doesn’t make this kind of bear anymore. Silas says that what he really loved about his bear was his smile. I have included a picture of Silas with his bear and of the closest full
picture I could find, but the colors are off on the second picture.

Any help you can give would bless us tremendously. We are almost certain that the clean crews on the plane tossed Bear-Bear out, but we will be more than happy with a replacement.

Thank you so much for your time,

If you can help Michelle find this Large 2006 Animal Alley Cream & Tan Bear with a Big Smile, THIS SEARCH REQUEST IS NO LONGER ACTIVELY MANAGED. Please use Our FREE FACEBOOK GROUP, including the POST CODE #16534,