Turns out, after talking to his son, that this IS the correct dog in the photo, so it’s a Jay at Play Microbead Light and Dark Brown Dog, which has been found. 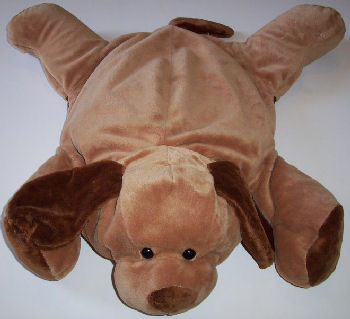 My son lost his cream colored dog that’s about 12 to 16 inch long and lying down. It had darker tan ears and was stuffed with some kind of beads, like half or less full. I just remember they felt like small soft beads. The material was not fluffy but more soft and smooth. It was not at all rigid. The dog was, for want of better words, very limp. It did not have a plastic nose, but I’m not sure about the eyes. I think it came from Toys R Us, possibly in 2003.

This boy was adopted at birth and is one of the most beautiful children I have ever been around. I am so lucky to be able to call him son. I shudder to think where he would of ended up if I hadn’t been able to adopt him. This animal was his best friend when growing up. He is 8 now, and it has been lost. He asked about it the other day and said he would love to give it to his son one day. I thought I might start a tradition and get a few for future generations.

I would be his number one hero if I could replace it.

If you can help Stephen find this Toys ‘R Us? Cream & Tan Lying Down Floppy Microbead? Dog (I think it’s a MOSHI style animal.), THIS SEARCH REQUEST IS NO LONGER ACTIVELY MANAGED. Please use Our FREE FACEBOOK GROUP, including the POST CODE #18093,