Laurie has her Waterpet, but we now have a mailing list of people looking for the various Water Pets animals. 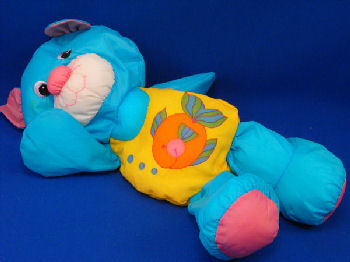 I’m looking for a Playskool No. 412 WATER PETS Puffalump style 12 inch aqua turquoise blue cat with pink ears, nose, and feet and a white muzzle. It’s wearing a yellow bathing suit with a screen print orange fish on the tummy. It has Styrofoam pellets in the head and body and Fiberfill in the arms and legs. There’s a hanging loop on the head.

My daughter went everywhere with this pet. She called it puffy, which then became puppy! She lost it once at around 22 months when we went on a friend’s boat…she had fallen asleep in my arms, sucking her thumb and let go of the water pet. She immediately woke up, and though I pleaded with the sailboat owners to “turn around and get it” ,they said no and we watched puppy float away! I said it wanted to go for a swim and she would be there in the morning when she woke up. We immediately, went to Toys ‘R Us and bought her another one and when I handed it to her in the morning, she said puppy was different. I said that was because she had been swimming all night to get home and she smelt like the ocean. Realizing she had to accept this explanation so she could be happy with puppy, she went along with it.

My parents would sometimes babysit my kids and after this story, my father took me up to his closet and showed me two extra “puppys” just in case, and we would eventually need them. Even when we went skiing, she would stuff “puppy” into the front of her snowsuit and at 4, she could be seen skiing down the mountain, blue puppy sticking out of her coat, sucking her thumb! We once left it at a restaurant when skiing, and in a blizzard, my husband went back to find it in the parking lot. It was worth it! The stories can go on and on and on, but suffice it to say, this would be such an absolutely wonderful baby gift for me to give my daughter, who at 22, is now expecting a baby boy in June.

Thanks for any help,

If you can help Laurie find this Playskool Water Pets Blue Cat Wearing Yellow Bathing Suit with Fish, THIS SEARCH REQUEST IS NO LONGER ACTIVELY MANAGED. Please use Our FREE FACEBOOK GROUP, including the POST CODE #18736,