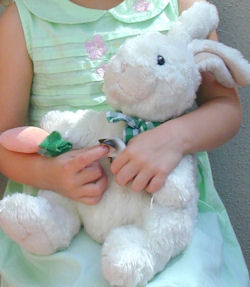 I’m looking for an early 2000’s or 90’s? large white rabbit with upright ears holding a carrot, with a plaid green and white bow. He is 12 inches tall to the top of his ears and 7 inches at the widest point. The missing one had already lost his carrot. It came as a set with a white (the missing one) and brown bunny. They had matching carrots and plaid green and white bows, and the noses were satin stitched. The tag is too worn to tell what brand they may be.

“White Bebe” was purchased at a garage sale in 2002 when my daughter was just 6 months old. The other bunny was “Brown Bebe”. Both bunnies where gently used and very soft and cuddly. In the beginning both the bunnies went everywhere with my daughter, but after a few months she became most attached to “White Bebe”…he went to daycare at the church nursery and of course slept with her every night from age 1 to 8.

He has been her best friend and most special stuffed animal from the beginning. One time my husband picked her up from daycare and White Bebe was accidentally left at the church. I was out of town on a business trip, and it was a big problem. He had to go back to the church and have the maintenance man open up the daycare after hours to get “White Bebe”.

Recently White Bebe never made it home from a trip to Miami. My daughter is so heartbroken that we can’t find him. We have called and looked everywhere for him. She is 8, but still sleeps with him every night. Over the years we had many garage sales and donated other stuffed animals, and she always tells me, “Mommy, I will never sell or give White Bebe away. He has always been there for me to help me with my bad dreams. I love him so much.” 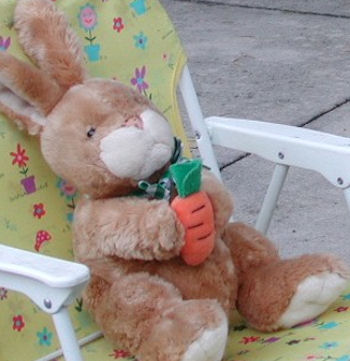 I am trying to replace this lost bunny that was very important to my daughter. Have you ever seen any like these before? Can you tell what brand they may be?

If you can help Cynthia find this Large White Rabbit Holding Carrot, THIS SEARCH REQUEST IS NO LONGER ACTIVELY MANAGED. Please use Our FREE FACEBOOK GROUP, including the POST CODE #19194,