We now know this chicken was available at Target around 2004. 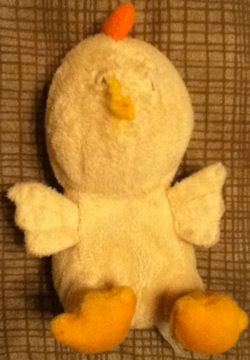 My son used to have the donkey, chicken, pig and cow. He still has the pig. We’ve lost donkey and cow. The chicken was always his favorite. He’s had it for about 4 years now I think. He couldn’t say chicken when he was smaller, so he called it “Calickalin”. He always had to have his Calickalin at bedtime.

He is 6 now and probably hadn’t messed with it much within the past year, until recently when he rediscovered it and started having it in the morning and at bedtime again. He still calls it Calickalin, even though he can of course say chicken now!

The darn dog got a hold of it somehow and chewed the eyes off and some of the beak, thanks to our younger dog. 🙁 Such a punk! LOL My son was heartbroken when he found his chicken was chewed. He was so mad at the dog he wouldn’t pet him the rest of the day.

I told him we’d try to find some eyes for it, but I also have been searching high and low on the web to find another. If you come across one, we’d be so appreciative!

If you can help Christine find this Shanghai Toy Yellow Seated Chicken with Red Comb, THIS SEARCH REQUEST IS NO LONGER ACTIVELY MANAGED. Please use Our FREE FACEBOOK GROUP, including the POST CODE #19230,