Dave has found a rabbit, but Sara is still looking for this rabbit. 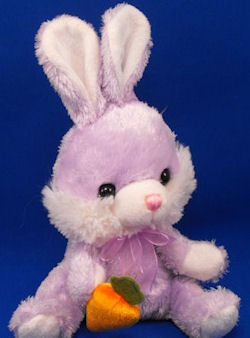 I’m looking for a Walmart 6 1/2 inch seated lavender rabbit with white velour muzzle and ears. It has white cheeks, hands, feet, and tail. The ears are upright. It’s wearing a lavender organdy bow and holding a shiny orange carrot.

I purchased this as an Easter toy for my daughter last year. It soon became her favorite toy, and it followed her everywhere. It would get dirty so quickly that I had to wash it once a week. The dog even tried chewing it up, but luckily I intervened before too much damage was incurred.

It became a regular process every night to find ‘Mr. Rabbit,’ as my daughter became quite clever in where she would hide him. She actually put him in the washer once–that took me a while to find. As much as I wanted to keep Mr. Rabbit safe and in a single location to prevent him from getting lost, she couldn’t go anywhere without him.

Now that he is permanently lost, she still cries for him at bed time. If I ever find a replacement, I just might put a radio collar on it!

If you can help Dave find this Walmart Lavender White Seated Rabbit Upright Ears Carrot, THIS SEARCH REQUEST IS NO LONGER ACTIVELY MANAGED. Please use Our FREE FACEBOOK GROUP, including the POST CODE #20889,