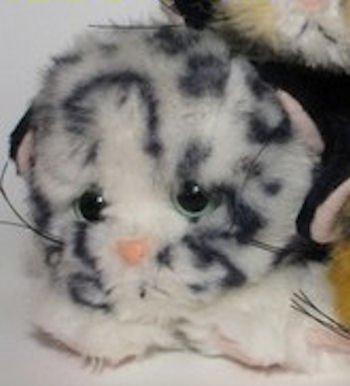 I am looking for a Kitty Kitty Kitten by the company called Tyco. It’s one of the kittens from the 1992 Kitty Kitty Jungle Kittens series. It’s the snow leopard one (all white except for black circle-spot patterns/lines all over its body). Around it’s neck it has a little pink and black collar/scarf I believe. I think the eyes were blue/pale blue with a black pupil. Sometimes it’s referred to as a white tiger, but it’s a snow leopard.

I had this little kitty since I was 5. It was my favorite stuffed animal of all time. I used to bring it with me everywhere (to school, outside, next to me while I slept). I’d love to find another one.

If you can help Melissa find this 1992 TYCO Snow Leopard White & Black Kitty Kitty Kitten, THIS SEARCH REQUEST IS NO LONGER ACTIVELY MANAGED. Please use Our FREE FACEBOOK GROUP, including the POST CODE #20894,