This is an edited photo based on description, but the rabbit should be holding the egg in BOTH hands. 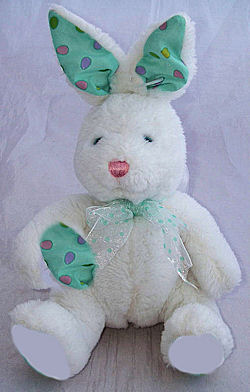 I am searching for a Easter bunny. He was white and its fur wasn’t real short, but it wasn’t long either, maybe ¾”. It sat upright with its feet facing straight out and its ears stood straight up (neither were floppy). The entire bunny may have been about a foot tall. Its cheeks were kind of fuzzy, but the same white color as the rest of the bunny. I don’t recall any whiskers and I believe its eyes were black plastic. It’s most distinctive features include the fabric inside its ears and on the egg it held between its front paws. The fabric was smooth and had a colorful Easter egg or jelly bean print on a solid, light green/blue background. The egg had a round, red felt patch of fabric on it that read “press me” or “press here”. When pressed, it played a lullaby of some sort.

When I was little, I won an Easter bunny at an Easter egg hunt; I believe it was sometime between 1991 and 1995. The Easter egg hunt took place in a park in my old neighborhood. Whoever found a large plastic egg, won a prize. Me and this other kid saw the egg at the same time, but I was determined and dove under a bush just to obtain it. When I walked up to the gazebo where they were handing out prizes, I was so happy to receive my Easter bunny. I think my mom accidentally threw it in a garage sale since I’ve been at school (I guess she didn’t remember?), but I’m hoping to find the same one, I assume they were mass-produced. My Easter bunny was very special to me.

If you can help Ashley find this Musical Easter Bunny (1991-1995?), THIS SEARCH REQUEST IS NO LONGER ACTIVELY MANAGED. Please use Our FREE FACEBOOK GROUP, including the POST CODE #041412-01,