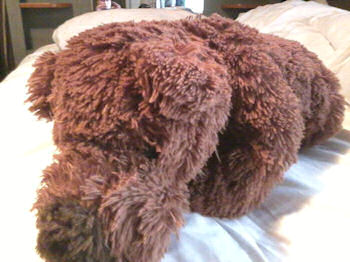 I’m looking for a large brown plush Walmart bear or dog with medium stringy hair, brown eyes, short round ears, and a ball tail. His nose is darker brown than his body, and his hands are sewn together. Originally he had a scarf that was brown and red around his neck. It’s about 2 feet long.

I bought “BearDog” at Walmart between 2003-2004, for my girlfriend – I can’t remember it was either a Valentine’s day or Christmas present. She loved it, and for the past 8-9 year she has taken him wherever she has went. We named him BearDog because we argued over what kind of animal it was (apparently I pick species confused animals). I say it’s a bear – she says dog, so BearDog. This animal has been the one constant in our relationship, and in her life really.

He’s getting really old and stuffing falling out and such. I hope to find a replacement for him so we can pass him down to her son, since he loves him so much. I’ve looked all over and never found a perfect match. There are similar bears, but they’re not the exact match. They came in both all brown with a dark brown nose and all cream/white color, and either one would be acceptable. REWARD for finding a site where I can buy him.

If you can help Brandon find this XL Walmart Shaggy Brown Lying Down Bear Dog OR Cream version, THIS SEARCH REQUEST IS NO LONGER ACTIVELY MANAGED. Please use Our FREE FACEBOOK GROUP, including the POST CODE #050212-01