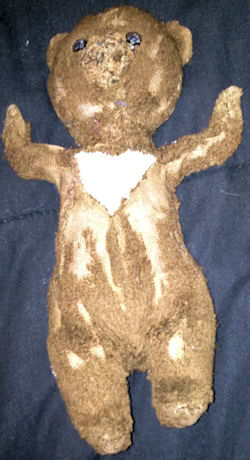 I’m looking for a replacement for a 25(+) year old 10 inch long teddy bear. The bear is dark brown, with a white triangle on its chest, black eyes, and a black nose. The muzzle is a lighter color. On its back, it has a a little floppy tail. On its right side it had a tag. My parents cut off the tag when I was a baby.

I was given “Mama Bear” as an infant in 1986. I grew so attached to her, I would not let her out of my sight. I sucked on her so much, most of her fur was lost. I even sucked on her nose, so she lost it. Mom was not able to find the nose, but after some “emergency surgery”, she was able to close the hole. As a result of being dragged along the floor as I crawled, poor Mama Bear is not only bald, but has glaucoma in both eyes!

My parents searched for a backup, being that I loved Mama Bear so much. That’s how Baby Bear was found. He wasn’t a backup – he was part of the family! Now poor Mama Bear is 25+ years old, and ready for beartirement. She has one last wish to find a younger, furrier, and less glaucoma version of herself for me to love for another 25+ years. 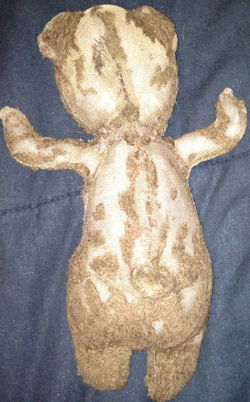 If you can help Stephanie find this 80’s Dark Brown Moon Bear with White V Triangle at Neck, THIS SEARCH REQUEST IS NO LONGER ACTIVELY MANAGED. Please use Our FREE FACEBOOK GROUP, including the POST CODE #24090