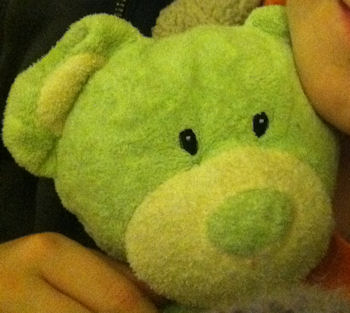 We are searching for a green velour bear. He is very floppy with long arms and legs, about 12-15 inches tall total. He is pale leaf green with a cream tummy, cream on his feet and hands, and a cream nose, a tiny stubby tail in green, and a rattle inside. His eyes are embroidered black, and his nose is round and cream with a green dot in the middle. He also has green ears with cream in the middle. The arms and legs sort of flare out into a fatter round for the paws. The ends of the paws have a circle of cream on them, but no stitching or “toes” just circular paws.

“Green Bear” was given to my son Henry two days after he was born in December, 2003. He came from a San Francisco boutique and was given to Henry by his godmother. Henry and Green Bear have been inseparable ever since! Henry is now 8 years old and has never spent a night without Green Bear. He has gone on vacations, to camp, and to numerous overnights- hidden inside Henry’s bag or pillowcase when he got old enough to think others might make fun of him.

We recently took a vacation to the mountains of North Carolina and in a frantic, hurried departure early one morning, Green Bear was left behind. We got home super late that night and didn’t unpack until late the next day, which was a Sunday, so I couldn’t call the rental agency. On Monday when we called, they said the maids hadn’t turned anything in.

Henry cries most nights when he goes to sleep without his special buddy.

If you can help Elle find this Green Cream Floppy Velour Bear, THIS SEARCH REQUEST IS NO LONGER ACTIVELY MANAGED. Please use Our FREE FACEBOOK GROUP, including the POST CODE #081812-01