It’s possible that this is a Prestige bird or duck, based on the eyes and the squeaker.

I’m looking for a seated Puffalump about 10 inches tall duck or bird – or a lookalike duck or platypus. It was bought in ’91 in Pennsylvania, but everything else is unknown.

Its parachute material was originally yellow with a white tummy and pink feet and hands. It had round eyes stitched on with black pupils and pink eyelids. She originally had a squeaker inside her like a dog toy – it was her brother’s first job, and he might have gotten her from a pet store.

She was purchased in ’92 or ’93 for my girlfriend when she was born. She named her “Squeeky”, because of her dog toy like squeaker toy inside. She took her Squeeky with her everywhere as a child and has since lived on her bed and is cuddled with her every night.

Squeeky is very loved and has been repaired and sewn back together several times, but her material has thinned and fallen apart beyond repair. She’s in tatters.

I would like to find another Squeeky for my girlfriend as a gift, because she sometimes sits before bed talking to Squeeky somberly about how beat up she’s become, and wishes she was in better shape.

The clothes in this older photo were NOT original. 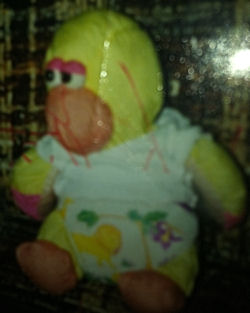 Thank you very much for helping,

If you can help Nick find this 80’s? 90’s? Yellow Puffalump Style Duck or Bird with Squeaker, THIS SEARCH REQUEST IS NO LONGER ACTIVELY MANAGED. Please use Our FREE FACEBOOK GROUP, including the POST CODE #24471