↓
Home » How to Repair a Musical Animal with Moving Head

Barb shared her experience with repairing one of the lovies that plays music and has head movement, such as this Eden giraffe. I thought it might help others to share her directions. 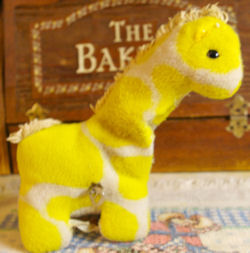 I found a new music box for my daughter’s. I opened up the stitching on an under side seam not much bigger than music box inside. Removed the stuffing to a plastic bag because I wanted to reuse it. The arm in ours was not attached anymore.

So I found a company online and ordered a “waggie” arm, new music box with two ports or holes , one for key and one for movement piece. There is a cover with two holes that some come with and you can also get a cover separate with 2 holes. You also need a small attachment that interfaces with that second port and the waggie arm. I also bought a key because the old one might not fit. The best thing might be to call the business, because I missed that piece at first!

I also hand washed and hung dry the giraffe as it really needed it. I stuffed the head good and some inside the neck then put the box in with the arm attached and put the key onto the box through the grommet hole on bottom of giraffe. I used a dull pencil and pushed the stuffing around the rod in the neck until it felt firm. ( I had to redo this a couple of times until I got the rod in the right place and the giraffe felt like it was stuffed and not lumpy).

Just continue to fill giraffe and check the feel as you move to the hole. Fill in rear area before you back yourself out of the hole. Close the seam with an invisible slip stitch and it is done.

My daughter was so happy! Now she can use it for her upcoming baby. The website that I used was https://ceramicdecorandmore.com. There is another one also in that same area of New York, but I can’t find my sales receipt. The website for these things were hard to find.