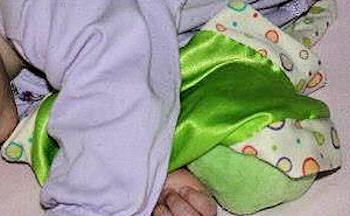 I’m looking for a Ganz green frog lovey blanket. The blanket itself is 12×12 inch, satin green on one side, super soft material on the other, has a one inch cream colored boarder with multi colored circles, and has a plush green frog head in the center of one of the edges (no arms/legs). The blanket was discontinued in 2008. The Blanket was originally sold by Ganz, Item #BG 1661.

My Daughter’s comfort blanket/toy fondly known as “lovey” was taken from our hotel room when on vacation. Housekeeping, when changing the bed linens, accidentally took my daughter’s one and only comfort item she has had since birth. She is now four and cries at night, and asks heartbreaking questions like, “Why would someone take her?” and “Did they put her in the trash?”. It breaks my heart and despite contacting the manufacturer and last known retailers who sold the item, it’s gone.

To make matters worse, she is a twin. Her sister still has her “lovey” which is a nearly identical, but is yellow and has a giraffe head. One still has her comfort item, while the other cries at night saying she wants hers back. Sadly, I never got a photo of green lovey alone, only with random shots of my daughter. Such an amazingly important part of my daughter’s life and I don’t have a photo to comfort her. It just breaks my heart I can’t help her. However, I do have a detailed photo of the yellow lovey which should help give an idea of what the green one looks like. 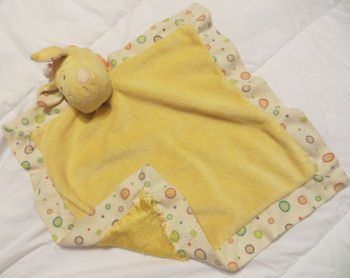 I have a list of the last five retailers who purchased the items and they are ALL OVER the states, MA,GA, UT, TN, AR, and OH. Sadly, after contacting all, it’s no longer in stock. Also, they do not have a photo of the blanket at this point either.
No, I’m not expecting to find her original blanket, (lost/taken in Florida), but I’m hoping someone who reads this knows of one tucked away in someone’s baby “stuff” and can give a huge sense of assurance back to my daughter.

If you can help Jodie find this Ganz Green Frog Lovey Blanket, THIS SEARCH REQUEST IS NO LONGER ACTIVELY MANAGED. Please use Our FREE FACEBOOK GROUP, including the POST CODE #25364