We now know this is a Galerie rabbit. 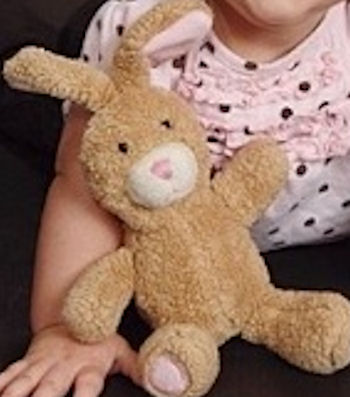 I’m looking for a tan rabbit with a white muzzle and pink nose, ears, and feet that I bought at Walmart in 2011 right after Easter – I believe the brand name was DanDee, but I’m not entirely sure. It had a purple ribbon around its neck, which I removed, and was holding a bag of jelly beans in one paw. It was about 10 inches in height if laid out flat from the tips of the ears to its feet. The ears did not have any stiffener in them.

When my daughter was born, I went out and bought this stuffed rabbit, because I had a little stuffed rabbit growing up and wanted to carry on the tradition. She has had this little rabbit for over 2 years, and it became her favorite stuffed animal that went everywhere with us and was fondly called ‘Rabbit’.

We were out shopping this last week, and somehow the beloved rabbit was lost… I’ve called stores, searched parking lots, restrooms, the car, dumped out all our bags, all to no avail. She is heartbroken over no longer having Rabbit to snuggle with at bedtime, and I am desperate to find another one like it.

If you can help Rachael find this 2011 Walmart Galerie Tan & Pink Rabbit, THIS SEARCH REQUEST IS NO LONGER ACTIVELY MANAGED. Please use Our FREE FACEBOOK GROUP, including the POST CODE #25773