One of our readers found two of these Sprinkles elephants in storage and emailed me. I wrote Amber, but she does not need them. If anyone else needs one, I can put you in contact with the gracious lady who has them.

I went ahead and bought my daughter a new elephant. I think she’s happy with it, so I think we’re okay. Thank you so much for your service! I can’t believe you contacted me about this–that’s wonderful!! 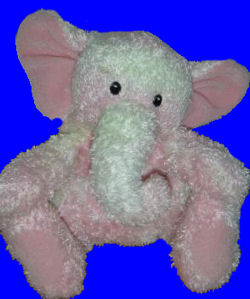 I’m looking for a pink stuffed elephant. It was pink and white with floppy ears, about 8″-10″ tall. I think it was Gund but I’m not sure. (It IS a GUND.) It was definitely for babies, as my daughter got this for a baby shower when she was born and was never separated from it until we lost it 1 year ago. It was lost at a hotel in Des Moines, IA, and I called several times for months making them look for it.

We gave up on it until lately, as she’s been talking about him. I tried to buy her a new one, but she wants her old one. She is 5 now, so the elephant was new in 2001 when she was born. If you can help at all that would be wonderful. Actually, a used elephant would be preferred…

If you can help Amber find this pink elephant, THIS SEARCH REQUEST IS NO LONGER ACTIVELY MANAGED. Please use Our FREE FACEBOOK GROUP, including #080107-5 in the subject, .

There are lots of new ones for sale on eBay, so I wrote Amber asking if she had tried one of those.

I just bought one from eBay and we are giving that a try. My 5 yr old knows it’s not “Ellie”, her original elephant, but she’s trying to bond with it. It’s like she wants to, but she’s still holding out for the original. That’s why I was thinking if I could find a very used one it would be better. Thank you so much for all of your help!
Amber

So I’m going to leave Ellie in with the Searching category, even though Amber has bought a new one, just in case someone has a used one they would part with.