Wynelle has found the bear, thanks to a comment one of our Fabulous Finders posted 4 years ago!!! She has a wonderfully miraculous story to tell, so please read her latest comment. 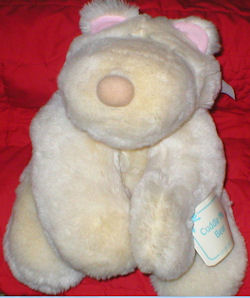 I have been trying to find a site to help locate a desperately missed very first bear purchased immediately upon notice in 1991 of first long-awaited pregnancy. Bless you!

Large Bear by Eden, lays on stomach, cream to white with blue satin ribbon, lost at Ramstein Air Force Base Germany Post Exchange Store (PX) in 1997 (I think). It is very soft with semi-long fur and his name is Cuddles. Don’t recall if that name was on the tag, or merely given. We now know that it is an Eden cream Cuddle Me bear.

*******************
UPDATE:
I am Wynelle who originally posted the request to find my daughter Morgyn’s bear. I did not get the message in 2007 about the possible find. I have just gone through a year of cancer treatment (was terminal stage 4 with less than a year, possibly 6 months to live). Morgyn had just graduated from high school and set to go to college when I was diagnosed. She chose to stay with me, instead, to help with me and her little brother (10 years old). Although we have excellent insurance, it is still quite expensive and with the inability to work (backed up to another devastating injury), she also decided to give up her college fund for my medical care and took a job, giving us every penny to help with living expenses, Christmas, anything we needed. We also moved from our very nice, modern 12-room home to a 1940′s home in need of lots of TLC.

We have never complained and consider it such a blessing, especially to simply be here to face all the challenges it presents. I have been blessed with some amazing miracles and despite the change to terminal just a few months ago, I am doing better than incredible. Today, just on the heels of an Earthquake here on the East Coast & Hurricane Irene, if my chemo brain is serving me well, we are getting horrendous rains again today.

I went downstairs to check on flooding in the basement and thought I’d tackle emptying one of the many boxes that have been neglected this past year while I was going through the surgeries and mega-treatments. I came across Morgyn’s “Boo-Boo Bunny” Ice Pack from which her grandmother accidentally threw out the ice cube. Morgyn @ 19 still wants to keep this special little guy so I decided to research and found what I needed.

As I was about to get up from the computer, “Cuddles came across my mind and I thought, “why not try again”. I had already spent quite a few minutes with various key word searches when I noticed a partial comment and recognized it to be my original search request that I had no idea was posted so beautifully. My heart jumped as I opened it to read my original request and then to my amazement a possible find.

Do I dare hope that this person is still available and Cuddles might be still able to come home to Morgyn? Oh please let this be another special miracle for her – she has done so much for me this past year. This would be the most incredible unexpected gift to give to her, even if she is now 19 years old. She still wants that bear so much – her very first friend. Please e-mail me! I couldn’t see the picture that the person sent. God Bless each of you!!

******************
I researched with Eden many years ago to get a replacement, but after a huge run around for hours, spoke to someone who thought they recalled the bear, but it was no longer purchased. Hoping to have a remake, I have been trying to recontact them, but haven’t even been able to pull up an active site again. I still see very soft excellent quality plush animals in stores, but can’t locate them any longer or the bear. Please see what you can do if there is anyone out there with help, ideas or most unbelievably, the original Cuddles if you found it at the Ramstein AFB, Germany PX. I will pay a reward for the return.

We’re still crying over Cuddles! I will dig through Keepsake boxes for a photo (there were lots) that will be helpful if you can post. Thank you!!’

If you can help Wynelle find this vintage Eden bear, THIS SEARCH REQUEST IS NO LONGER ACTIVELY MANAGED. Please use Our FREE FACEBOOK GROUP, including #121307-5,