↓
Home » Searching – WHITE CAT with DARK BROWN STRIPES on His BACK 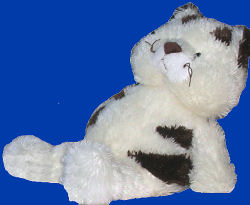 . Hi – I’m the guy from the MSNBC story that also featured your site. What a great thing you have going here!

It’s been a month since Gigi was lost, but Simon still mentions him every couple days, although he has taken to his Gigi Bear replacement pretty well.

Still, we would like to find Gigi again, either the real one or a replacement of the same make. He had no tag, so we don’t know who made him – and we bought him at Marshall’s and have no receipt…so that trail has ended.

Maybe someone out there will recognize his maker?

My wife’s idea – I thought it would traumatize him more, but he enjoys hearing about Gigi and knowing he’s around somewhere. He thinks that Gigi is out there on the train having fun, and playing on the elevator in the station.

If you can help Keith find this world traveling (read the MSNBC story to find out about the postcards) white stuffed cat with dark brown stripes, THIS SEARCH REQUEST IS NO LONGER ACTIVELY MANAGED. Please use Our FREE FACEBOOK GROUP, including #010908-1 in the subject, .