If you read the comments on this post, you will get to follow a great story. One of our frequent readers and helpers, Tami, saw Mr. Go Go Beans on eBay and put the information in a comment here. We were not home today, so I didn’t email Stacey with the link, the way I normally would have. Stacey sees the comment – did somebody who knows her let her know? I have no idea how she knew, but she bought it, and came back here to thank Tami for her help!
Sometimes truth is stranger than fiction, folks. 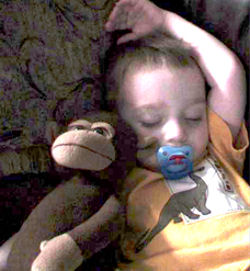 My son, just before his 3rd birthday, lost his best friend, Monkey Monkey Go Go Pork ‘N’ Beans. He named him that several months prior, and the monkey had become the centralized character to all of his bedtime stories.

Go Go Beans, as we nicknamed him, was left on an airplane. On the hour-long car trip away from the Denver airport, I realized the monkey was missing. Our In-Laws wouldn’t turn around on our midnight journey, so the first thing I did when we got to their home was to call and fill out a missing-item report. 2nd was to look on eBay to see if there was another available. That was in September of 2006, and I have been looking on eBay at least once a week ever since.

Noah didn’t notice that Go Go Beans was missing at first. We attempted to distract him with the wiles of being on vacation. Once we got home, we were heading out on a road trip to an improv festival. On the way out the door he said, “Don’t forget Go Go Beans!” We sat him down. He cried. A lot. We explained that Go Go Beans stayed on the airplane, because he had so much fun, and that hopefully he’d see the world and then come home soon.

Noah asked to write a letter to him. He dictated and I wrote and drew pictures at his request.

After talking with Target (the parent company that made the original monkey), and their unwillingness to help, I turned to the internet.

I posted the letter to a general discussion section of the Etsy.com forums 10 days before his 3rd birthday. I wanted to know if a few people would send a post card from Go Go Beans.

As of right now, (January of 2008) we have more than 150 post cards from not only around the country, but from around the world – France, Kuwait, York, Australia, Germany to name a few. People have sent stuffed animal friends that Go Go Beans sent back along the way, they’ve sent artwork, newspapers, magnets, stationary and more. And with all of the many post-cards sent by complete strangers drawn to the story, we have no way of thanking them. We just know that this little boy is thrilled for their kindness.

And while we’re still looking for the real Go Go Beans (yes, weekly on eBay) my little guy is excited anytime a post card arrives in the mail. He’s 4 now, and can’t read just yet, but he knows anytime we get anything in the mail, whether it be a box or a letter or post card, he shouts “Its from Go Go Beans!” and his little heart bursts into delight, instead of tears.

If you can help Stacey find Go Go Beans, the Cuddle zone brown chimp, THIS SEARCH REQUEST IS NO LONGER ACTIVELY MANAGED. Please use Our FREE FACEBOOK GROUP, including #011408-2, 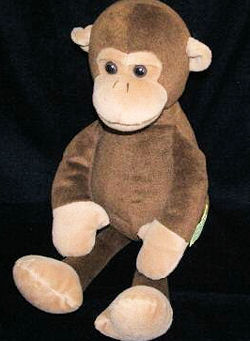 PLEASE BE SURE YOU USE AN EMAIL ADDRESS THAT IS CORRECT, AND THAT YOU WILL BE USING FOR A LONG TIME!!

I can’t help you if I can’t contact you!!