Do you think Robin is excited???? 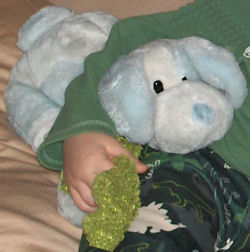 My son Joshua attached himself to two green fleece socks from Target (yes, I said socks!) when he was just 10 months old. We tried to rotate them, but he soon realized there were two and began to carry them everywhere. We tried to buy other snugglies (my mom bought every color she could find), but none of them seemed to have the exact same texture as the pair he loved! He would get excited, then rub them against his cheek and say “not a snuggly!!”

A year later, one of his “snugglies” (his name for them) vanished – possibly thrown from our car window by his 2 year old brother. Joshy cried for an hour while we searched parking lots and retraced our car’s path.

Finally, we gave up and went home – where Joshua immediately latched onto “doggie” – a stuffed animal that sat on his shelf ignored until this crisis. 2 1/2 years later, doggie AND snuggly go everywhere that Joshua goes (except for an occaisional nap with mommy during preschool). I searched Toys R Us for a second “doggie”, but it had been purchased 2 years earlier, before he was even born, and was no longer in stock.

After all of this time, snuggly no longer even looks like a sock and doggie is no longer white with blue spots – more of an all-over gray 🙂 – and he’s had several holes repaired. Every time I go to Toys R Us I check their “Animal Alley” section, just in case, but to no avail. I stumbled across this website doing a google search, and realized that their still might be hope for a second doggie – just in case anything ever happens to him!

Thank you so much for your help in our search!

If you can help Robin find this Animal Alley White Dog with Blue Nose, Ears, and Spots, THIS SEARCH REQUEST IS NO LONGER ACTIVELY MANAGED. Please use Our FREE FACEBOOK GROUP, including #080708-6 in the subject, .