I’m not sure how you got involved in this service, but I think it’s a great idea. You might like to hear another story. Christmas, 1952 – I lived with my family in England. I received a large Merrythought Teddy Bear from Father Christmas.

The following April, my family emigrated to the U.S., but because of space and convenience, I couldn’t bring the teddy. I had to give it to one of my cousins. I still talk about that teddy 55 years later! Such is the effect that these childhood toys can have on us.

My parents told me that everything was bigger and better in America, and I could get a new one. Suffice it to say, nothing came near that teddy. Now our daughter is expecting our first grandchild, and I decided to buy an English teddy bear.

So, I went on eBay, where I did purchase one, but I also found a teddy very similar to the one I left behind. I was able to buy him at a very reasonable price.

I received the bear and I love him. He is vintage and who knows, could even be the same bear. That’s dreaming.

I also got the Eden musical lion on eBay (We had found this for her without needing to post here on the blog). There was one other person in the world who also seemed to want him, so I had to bid higher than I originally wanted to. But this was important to me also. So, all is well with the world.
Joyce

The really weird thing about that Eden lion that Joyce said was wanted by one other person in the world???? Not long after she wrote me we were contacted by Rob and we recognized his description as being the very lion we had just found for Joyce! 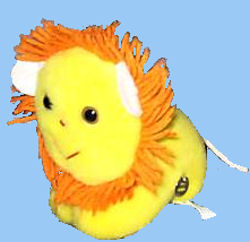 If you can help Rob find this 70’s Eden Yellow Lion windup that plays You Are My Sunshine and the Head Moves, THIS SEARCH REQUEST IS NO LONGER ACTIVELY MANAGED. Please use Our FREE FACEBOOK GROUP, including #073108-1 in the subject, .