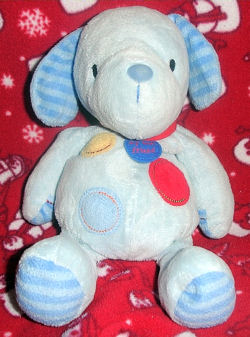 Dawg Dawg, as my 14 month old son calls him, is his best friend. He is a Carter’s Just One Year blue dog, with one yellow, blue and red spot on his stomach, and stripes on the bottom of his feet and inside his ears. He also wears a red collar with a doggie tag and has a rattle inside.

Our son loves to suck his thumb and the dogs ear and walk around the house with a puppy dog face. Just saying “Where’s Dawg Dawg??” causes him to go running around the house (he usually knows exactly where he is!) to get him and do his routine. Although when he goes to bed and gets night-night (his blanket) Dawg Dawg gets tossed to the side.

Dawg Dawg is 1.5 years old. We adopted him before Evan came along, and we haven’t washed him yet. He is a little stinky and dirty on the top, but overall in good shape, but I want to be proactive and make sure he will have a Dawg Dawg for as long as he needs it. I also want to keep this one for my wife before it gets too destroyed. I don’t know if he will fall for a Dawg Dawg 2.0, but I am willing to give it a shot when needed.

If I can get them for a reasonable price (which online seems like it will be impossible) I was thinking about buying 10 of them and tossing them on the ground near where Dawg Dawg 1.0 is, and say “WHHEREES DAWG DAWG?” and video tape his reaction!

If you can help Christopher find this Carter’s Just One Year Blue Dog with Spots and Stripes, THIS SEARCH REQUEST IS NO LONGER ACTIVELY MANAGED. Please use Our FREE FACEBOOK GROUP, including #082408-2 in the subject, .