We have a mailing list of people looking for the Jelly Cat / Jelly Kitten blankies in various animals. 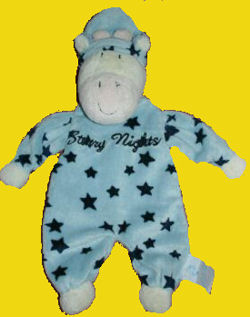 I need to find a blue Jellycat Starry Nights pony for my second son, Harry, who is 5. Someone said they had found a blue one, and we are desperate for the blue! (It’s been sold.)

We are trying to find the Jelly Cat Starry Nights horse/pony for my second son, Harry, who is 5. He originally had the purple one with a gray face, but that was lost. We were able to replace it with the blue one, because he was still so young.

The blue one we have is much loved, and is now almost completely ripped in two, with no hat. I would like to get a newer one so that the old one can be put into retirement. Harry calls it his mummy num num, we also have a smaller version, which is baby num num. It got the name num num because when he was tiny it sounded like he was saying num num when he was cuddling it. Harry can’t sleep without them.

If you can help Tina find this Jelly Cat Blue Starry Nights Pony, THIS SEARCH REQUEST IS NO LONGER ACTIVELY MANAGED. Please use Our FREE FACEBOOK GROUP, including #092708-1 in the subject, .