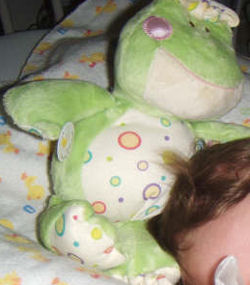 This frog is so loved by my daughter that she absolutely lights up when you pull the “bumble bee” string down out of the frog’s foot. It plays “You Are My Sunshine” in a music box type tune.

It is called the Gum Drop Musical Pull Down Frog, Code BG1662 on its tag. It is a light green, with a cream colored tummy that has circles of all the colors of the rainbow on it. The bumble bee that is attached to the string comes down from the foot of the frog and has delicate mesh wings. The frog has a bow on the top of its head that can be used to tie it to a crib in the same colors as its tummy.

When my daughter was 6 weeks old my daughter became very sick, and she had to be admitted to the Children’s Hospital of Eastern Ontario. I bought her that little frog from the gift shop, because I loved how delicately that song played.

She lit up when I brought it to her and still smiles every time the song plays. Its cheeks lite up (red LED lights) so it kept her focused through some really awful and painful testing blood work, mri, ct scans and a bunch of radioactive blood testings.

She has since recovered, and we don’t go anywhere without it. She absolutely loves it. She’s almost 6 months old now, but we pull the bumblebee string to play the song so often that it has started to miss notes of the song ( not due to battery depletion because it works like a music box).

I’d like a new one, because she loves listening to the soothing music. It gives her comfort. She also likes to suck on the bumblebee, so the wings are almost gone. I’ve written to baby Ganz with no luck, I can’t find this frog anywhere. It would mean the world if I could just replace my daughters lovie.

Thank you so much for your time and willingness to help me.

If you can help Julie find this Baby GANZ Gum Drop Musical Pull Down Frog, THIS SEARCH REQUEST IS NO LONGER ACTIVELY MANAGED. Please use Our FREE FACEBOOK GROUP, including POST CODE #102508-3 in the subject