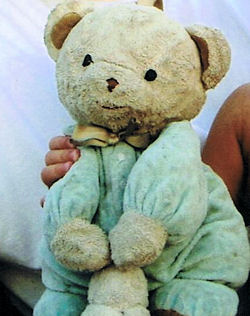 Ethan got this bear at his one year birthday and fell in love with it. He calls it “bear”, and he left it at the park last night right after we had professional pics made with him in flannel pj’s and bear! uh.

We have searched and searched and someone had to have picked it up, and so far it has not been turned in. He has been crying off and on as he says, “I love bear so much. I miss him so much.” They have been friends for 3 1/2 years.

The photo is from the earlier years, as bear has had surgery done on him to remove the broken music box and add stuffing. The hands were sewn together, but not anymore. The pull ducky from the stomach is pulled out and won’t go back up and has a small hole in it.

He uses the small tag on the leg and the ribbon on it’s neck to rub on when he is tired. The bottoms of the bear’s feet are brown.

I have searched everywhere for one like it, and Carter’s does not carry this bear they made three 1/2 years ago…I have been on eBay, and there is one similar I have found – but it is a dog, not a bear and the woman wants $30.00 for it, and it is used!…it does not have the ribbon around its neck either.

So I just don’t know what to do.

Thanks for your help,

If you can help Misty find this Carter’s Blue Bear with Duck Musical Pull, THIS SEARCH REQUEST IS NO LONGER ACTIVELY MANAGED. Please use Our FREE FACEBOOK GROUP, including POST CODE #112108-3 in the subject