I showed my son the picture of his ‘bunny’ and the puppy that Rosemary suggested it really was (which I think it is, too, now that I’ve spent hours looking at Carter’s thermal bunnies, puppies and bears) and he absolutely insisted he wanted the new bunny on Ebay and became quite incensed (hilariously so) when I suggested Mr. Bunny was really a puppy.

So thank you all very much for your help! I think our bunny search is at an end and he’s probably going to keep both and eventually Mr. Bunny will fall apart. Hopefully the new bunny will be just as well-loved by then. 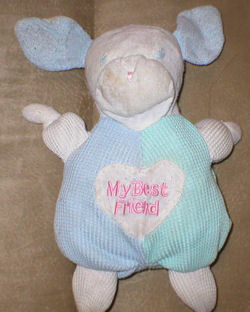 I am looking for a replacement Carter’s Thermal My Best Friend Bunny. It was originally purchased in 2001 or 2002 for my adopted son. It’s blue and teal green with floppy ears and says “My Best Friend” on the chest.

He has slept with it every night since he was adopted six years ago. He has several developmental and speech issues and takes great comfort in Mr. Bunny. His current one is nearly disintegrated from love.

I would do anything to find him another.

If you can help Donna find this Carter’s Thermal My Best Friend Rabbit Dog LOL!!, THIS SEARCH REQUEST IS NO LONGER ACTIVELY MANAGED. Please use Our FREE FACEBOOK GROUP, including POST CODE #120808-2 in the subject