I lost my best friend, Mousie when I was 14. He was a gray stuffed mouse (maybe by Applause?,) but what made him original was that he had a frown. His eyes looked like the “Precious Moments” type eyes. He was around 14 inches long. He had a “bear type” body meaning arms and legs that extended from his body, and I believe he had a long tail.

The edited photo looks a bit like the real Mousie. His head sat more on his body like he didn’t have much of a neck (if any), and he had a frown with another tiny frown shaped line under his mouth (like a kid when they pucker up their chin). The pink material in his ears was like bed sheet feeling. 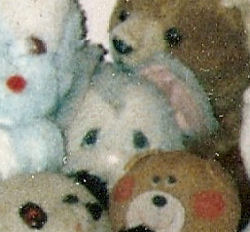 His widow’s peak hair was wider and the point of it was closer to his eyes. And his eyes were so much like the Precious moment character’s eyes – I am wondering if he was not from their line? He was the only boy mouse and the only gray mouse in the whole bin. We got him from Gold Circle. He was in a free standing square shaped bin and he was the only one. The girl mice were brown, and they had on a pinafore and a bow and they smiled. He never had clothes. I have tried to find him for sooooo long…

I had a bad childhood, but he was my best friend through it all. Recently, I came across the ONLY photo I have of him, and I started crying. I haven’t seen him for 20 years. It may seem silly since I am 34, but it tugged on my heart to see the glimpse shot I have of him. I have tried to recreate an image of him from this photo (for my hubby and bff – to keep an eye out at garage sales).

I would love it if someone had him.

If you can help Aimee find this 70’s? 80’s? Applause? Precious Moments? Gray Mouse with a Frown and Tear Shaped Eyes, THIS SEARCH REQUEST IS NO LONGER ACTIVELY MANAGED. Please use Our FREE FACEBOOK GROUP, including POST CODE #030309-1 in the subject