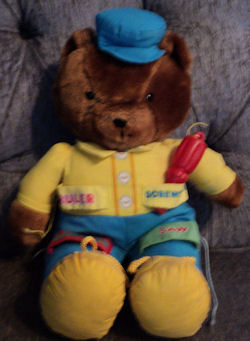 I have been searching for a long time for a bear my brother used to have. We got these bears when were about 2-3 years old. The bear he had was a tool bear. He had different tools, like a hammer, and I think he wore a little soft hard hat. The bear was the from the same company as the doll I still have. My doll says 1984 Amtoy, American Greetings New York, NY. I believe it’s a “Teach and Play” doll/bear.

My brother was really attached to it when we were kids. We got a dog when I was about 14 years old, and for some reason my mom thought my brother’s bear would be a good toy for the dog. I guess she thought he had outgrown the bear. When my brother saw the bear in the backyard torn up by the dog, he was pretty upset. At the time he was 12 or 13, I can’t remember exactly. It was just one of those things that we’d had since we were little, and the doll and the bear were the only things we had both ever had for so long.

I really just want to find it for him, so he can have it back. I know he’s looked for it before, but has never been able to find it. I just think it would be really cool to be able to give it to him.

Anyhow, that’s why I’m looking. Any help would be greatly appreciated.

If you can help Barb find this 1984 AMTOY Teach and Play Bear with Tools and a Soft “Hard” Hat, THIS SEARCH REQUEST IS NO LONGER ACTIVELY MANAGED. Please use Our FREE FACEBOOK GROUP, including POST CODE #032909-2 in the subject