It’s worth noting that Melissa purposely took this photo just in case they did ever lose it. This is one of the best things you can do to increase the chances of finding a lost lovie! 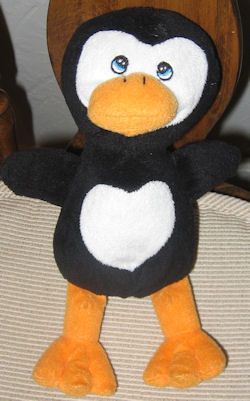 I’m looking for a stuffed penguin that sits about 7 inches tall. He’s black with a white face and tummy, both of which are heart-shaped, and has an orange beak and feet. He has sad blue eyes that remind me of Precious Moments, but he’s not. His tag is labeled SKM Enterprises. We picked it up secondhand, so I don’t know where it was sold.

My two-year-old became attached to his Nin-nin, carrying it with him everywhere. Unfortunately, when I was in the hospital delivering his little brother, Nin-nin got lost. Now my little guy is trying to adjust to having a baby around and missing his lovey. It’s especially hard right now, because he sees penguins everywhere as part of Christmas displays and comments on every one, “Nin-nin?”

If you can help Melissa find this SKM Small Penguin with Heart Shape White Face & Tummy, THIS SEARCH REQUEST IS NO LONGER ACTIVELY MANAGED. Please use Our FREE FACEBOOK GROUP, including the POST CODE #24636