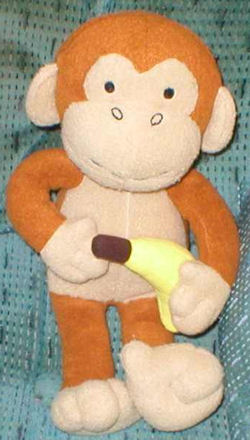 I’m looking for an 11 inches tall, brown and tan in color monkey that is holding a banana, which is now detached. He is from Old Navy, we know that from the tag on his bottom. Old Navy is about the only part that can be made out, as it is so faded. I have contacted Old Navy corporate, but they told me they could not help me.

Moy (as he is now known), the monkey came into our family when my daughter (two at the time) found him laying face down in a puddle in a parking lot. She was so upset that the monkey was all alone. We let her take him home and we cleaned him up. From that day on she carried him around and he was called “the street monkey!” When my son came along, he too became attached to the monkey. He was also two when he really started to take an interest in “the street monkey.” My daughter, 5 at this point, decided she would let her little brother have it!

One day (last year) my son came to me and kept pulling on me to follow him and telling me he could not reach “da moy.” I had no idea what he was talking about so I followed him to his room and sure enough he pointed to the monkey and said, “Dat moy.” I laughed and asked him, “Oh, you mean the monkey?” to which he replied, “Dat’s what I say, da moy!” From that day on the street monkey had a real name, Moy.

My kids love him so much, especially my son. Moy is literally his best fried. We cannot leave the house without him. My son is three now and my daughter six, and they have so many wonderful memories with Moy, not to mention pictures! He is starting to fall apart and our hearts are just breaking, for my son and for Moy.

If you can help me in anyway it would be greatly appreciated!

If you can help Cori find this Old navy Monkey Holding Bannana, THIS SEARCH REQUEST IS NO LONGER ACTIVELY MANAGED. Please use Our FREE FACEBOOK GROUP, including the POST CODE #24923