Penny is still looking for Taffi. She writes:

I’ve been looking for something like 10 years. I have my doubts that she was ever made. Just part of the pamphlet that came with the rest. I found a miniature of her but still want the plush version of her. I tried disguising an extra Miz Maudie once, but that was just temporary insanity. 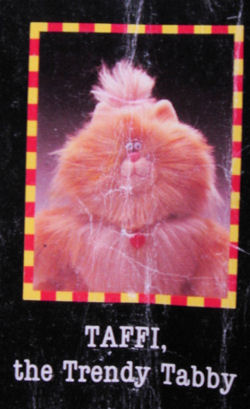 I’ve enclosed the best photo, actually, the only photo I have of Taffi. The reason I’m looking for her is because I started collecting the Purrrsonality Cats a little over 8 years ago.

The date on the Taffi Cat is 1986. She is an orangish tabby cat with a topknot tied with a pink (I think) bow on top of her head(she’s a trendy one). She’s wearing a necklace with a red heart around her neck.

She’s a long hair Tabby that will probably stand 13″ tall give or take some. The rest of the collection is approximately that height. Oh yes, she’s probably on the chubby side.

I found my first Purrrsonality Cat in a thrift shop that had just opened. His name is Franklin the Top Cat, the distinguished male out of the three male cats. There is Chuck, the Physi-Cat, the athletic one, Lester the Whiz Cat, the professor type cat, and Miz Maudie the Tender-Loving Cat, very proper.

Then there’s Taffi, the Trendy Tabby, the, well, trendy lady cat. The elusive Taffi is the only one left to complete the set. I have yet to talk to anyone that has even seen her. Hallmark also made Merry Miniatures of the group. I found Taffi a couple of times as a miniature, but I didn’t collect them.

I want the plush version of Taffi, because it will complete a set that has been difficult to collect. The Cats are a family and without Taffi, it’s hollow. I appreciate anything you will do to help.

If you can help Penny find this Hallmark Taffi Plush Orange Lady Purrrsonality Cat, THIS SEARCH REQUEST IS NO LONGER ACTIVELY MANAGED. Please use Our FREE FACEBOOK GROUP, including #090308-2,