We still have a mailing list of people looking for this giraffe and another very similar to it.

Hello, Rosemary. I am writing with a success story! I received the giraffe in the mail from Anne today, and it is just how I remember it. I hope that it is the way my friend remembers it too! =) I can’t wait until she sees it. Thank you for your help! 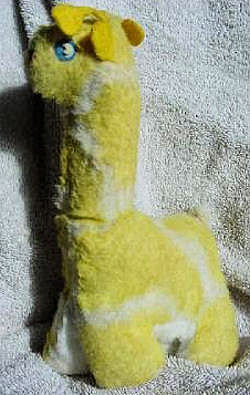 My friend is pregnant with her first child. She has been talking about her first toy as a child, an Eden giraffe.

The giraffe was the first toy that she received as a baby. Her father bought it for her. It was yellow and white. It did not have any fringe along it’s neck – just the two bumps on the head and eyes and ears. It was tall and slim – not one of the short plump versions of a toy giraffe you sometimes see. When it was wound up the toy played “You are my Sunshine” and the neck and head moved in a circular motion.

The giraffe was her lovey throughout her childhood as her father battled cancer. He lost his fight when she was in the 6th grade and the lovey became even more important to her. Time went by and her mother felt she needed the support of her family. This meant selling their home and moving across the county. It also meant that many mementos of her father and her childhood were sold and given away to make the move easier.

Her mother made sure that Dawna’s beloved giraffe and her baby book were packed safely away, so that she would have them when she grew up and was ready to start a family of her own. And she did have them….

3 years ago she evacuated during Hurricane Katrina. She escaped to Texas to sit out the storm. She didn’t think to take her “lovey” and her baby book with her. Who would? They were lost, but her fiance and her mother were both fine. That was the important thing. Besides… she wasn’t ready for a family yet.

In December of 2007 her mother passed away. In February of 2008 Dawna found out that she was expecting her first child. Her little girl is due and will be named after Dawna’s mother. Last night Dawna was feeling very nostalgic for the days when she had both her mother and father – and her little giraffe. She said, ” I just wish I could give it to Emma-Leigh as her first toy.”

I don’t know if the giraffe can be found. But, I would love to surprise her with it.

If you can help Crystal find this Eden Giraffe that plays You Are My Sunshine while the Head Turns, THIS SEARCH REQUEST IS NO LONGER ACTIVELY MANAGED. Please use Our FREE FACEBOOK GROUP, including POST CODE #103008-10 in the subject