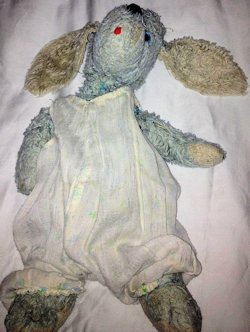 I am searching for a pastel 1992 Commonwealth blue Nitey Nite dog. Or it might be a Nighty Night dog? He’s I guess something of a ‘bearish’ dog, but definitely a dog! He has a nightcap and pajamas that is mostly just a sleeveless jumper. The clothes are of a cotton broadcloth type cloth in white with a pale floral pattern on it. It might have been brighter, but I recall it being quite soft in colors.

I re-attached his ears a couple of times for my sister when we were younger. My sister has had this stuffed dog, named ‘BoBo’, since she was about five years old, and it has been everywhere with her!

Now, 30 years later, my sister is expecting her first child, and I would very much love to get her a BoBo for her own child…I was really hoping to find one in a bit better condition. I know it would mean so much to her if she could share a new(er) BoBo with her first child.

Stephanie
If you can help Stephanie find this 1982 Commonwealth Pastel Blue Nitey Nite Dog, THIS SEARCH REQUEST IS NO LONGER ACTIVELY MANAGED. Please use Our FREE FACEBOOK GROUP, including the POST CODE #29787