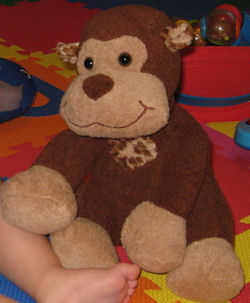 I’m looking for a 2008 World Market stuffed monkey, approximately 14 inches tall, with a brown body and lighter tan hands and feet. His tail, ears, and a patch on his chest are leopard print. The monkey is smiling. It is NOT the one with a leopard print bow.

I purchased him when our son was 6 months old. He left his best friend in the airport this past week and is devastated! I called the airport lost and found several days in a row, as well as the hotel to check if it was lost on the shuttle.

Go figure- the monkey made it through immigration and customs in two countries and for 7 days in Jamaica (going to the beach, restaurants, on those shuttles, etc) and gets abandoned on a airport chair (most likely) at Philadelphia International. Unfortunately, anyone who found him most likely just threw him out, but we can only hope he was taken home as a toy 🙂

If you can help Patricia find this 2008 World Market Brown & Tan Monkey with Leopard Accents, THIS SEARCH REQUEST IS NO LONGER ACTIVELY MANAGED. Please use Our FREE FACEBOOK GROUP, including the POST CODE #21021,