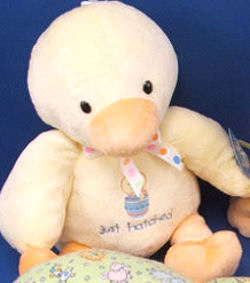 I was wondering if you might have a Carter’s Just One Year Just Hatched yellow duck. He is yellow with an orange beak and a ribbon around his neck. He has a picture of a hatching egg on his tummy, and it says Just Hatched around it. He plays Rock a Bye Baby, and his cheeks light up when you push his wing.

At our baby shower, my great uncle gave us this stuffed ducky. Little did we know that it would become our daughter’s favorite. She soon got him so dirty I had to wash him. He came out with one cheek that no longer lit up. I finally found another on eBay and quickly purchased it. We made it into the ducky that stays in bed and the older one became the one she played with. This way, she wouldn’t get the new one dirty, and I couldn’t ruin him in the wash.

Well, it wasn’t long after that she learned how to take her diaper off and enjoys doing it when I don’t know she’s awake in bed (she can be very quiet for a while until I finally hear her grunt or something like that). This, as you can imagine, led to some accidents in bed and soon a ducky who needed to be washed. Now, we have a ducky whose cheeks don’t light up, and a ducky who no longer produces music. I’m now on the hunt for a new one to put up in her room where he won’t get dirty as a kind of momento for her later.

If you can help Jessica find this Carter’s Just One Year Just Hatched Yellow Duck that Plays Rock a Bye Baby & the Cheeks Light Up, THIS SEARCH REQUEST IS NO LONGER ACTIVELY MANAGED. Please use Our FREE FACEBOOK GROUP, including POST CODE #093009-5 in the subject