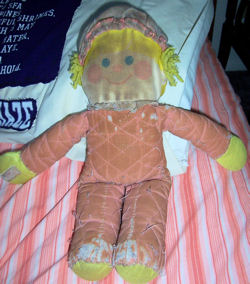 I have had a little clown doll literally my entire life. I’m 23 now, and in those years, Clown faded and has gotten new clothes, but I still sleep with him.

The clothes he has now are ones my dad (aka Santa) sewed on to him when I was a kid, because he was getting holes in his original ones.

However, the fabric from the original outfit is still on his hat, which I’ve taken a close-up of.

He’s at least 23-24 years old. He has a squeaker in his stomach, rattles in his legs, and his hands have Velcro on him, so he could hold on to the side of a crib. His tag is still there, though it is so faded I can’t make out anything except for a blue circle with a P (or lowercase d) on it.

I’m just wondering about the doll… the only time I’ve ever seen one like him was on an episode of the Nickelodeon show “Today’s Special.” I’d like to know who made him, when, etc?

If you can help Kayla find out about this 80’s Blond Clown Doll Wearing Pink with Polka Dots, THIS SEARCH REQUEST IS NO LONGER ACTIVELY MANAGED. Please use Our FREE FACEBOOK GROUP, including POST CODE #103109-2 in the subject