We were able to help Tracie, but Stacy is still looking for a Galoob Lost n Found panda bear. 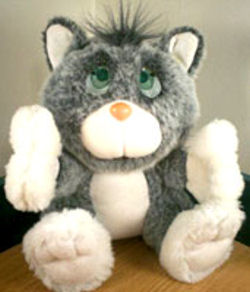 When I was seven years old I received the gray Lost-n-Founds crying cat for Christmas. Lost ‘n Founds were produced by Galoob in 1989. They were a set of plush animals measuring 11 inches high. They cried real tears when fed from their bottle and made crying sounds when cuddled.

When I got the cat my parents and I had just moved in with my great-grandmother a few months previously. She passed away five years later, and my grandfather, her son, became the owner of her house. Before she died she insisted that we be allowed to stay for as long as we wanted. She only left the house to him, so he would pay the taxes on it. We lived there for a couple more years, but one summer we returned from a vacation to find he had sold the house and everything in it, including my cat.

I’ve been able to replace almost everything I lost, but I just can’t find this cat anywhere. I’m nearly thirty now. I’ll be having kids of my own soon and really want to give them the toys I had as a kid. They may not be the exact ones I had as a child, but a replacement is good enough.

I would love any help, even just links to ebay auctions, as I am having no luck on my own.

If you can help Tracie find this 80’s Lost n Founds Gray Cat that Drinks & Cries, THIS SEARCH REQUEST IS NO LONGER ACTIVELY MANAGED. Please use Our FREE FACEBOOK GROUP, including POST CODE #112209-3 in the subject