Thanks to one of our Fabulous Finders, we now know that this is a Bunny Squeekles. 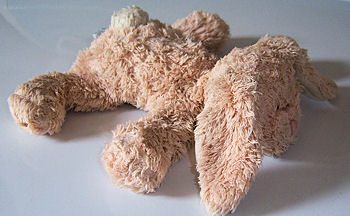 I am looking for a Baby Boyd’s plush little bitty pink bunny rabbit with a squeaker in its belly.

The one I have was given to me for my daughter when she was born. She starting really taking a liking to it when she was about five months old. She’d cram the little bunny’s ear in her mouth and nearly choke. She always lights up when she see’s her “Nee Nee”.

When she was a year old we lost it at a store. She cried at bed time, and so did I. I should not have let her take such a valuable toy out of the house. The next morning I called the store and asked if they had found this dirty little bunny. They had! Wow, I was so happy, and we rushed right over.

My daughter is now almost two, and this bunny is worse for wear, and I really want a replacement. I have hunted the Internet high and low. I did find a blue dog that was similar and thought would be fine. No way! Then I found a bunny on eBay…. but it was blue. Surely this would do the trick, since it’s the long ears that my daughter twists between her fingers. But the ears were shaped differently and she didn’t take to it like I thought she would.

She does play with all three, and we call them Nee Nee and Nee Nee’s brother and sister. Her favorite is the pink one, and it is on its last leg.

I would greatly appreciate it if anyone has one.

If you can help Brenda find this Baby Boyd Bunny Squeekles Small Pink Rabbit with a Squeaker in the Tummy, THIS SEARCH REQUEST IS NO LONGER ACTIVELY MANAGED. Please use Our FREE FACEBOOK GROUP, including POST CODE #113009-3 in the subject