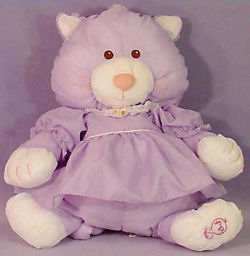 I’m looking for a Fisher Price 1986 No. 8002 Puffalump purple cat with white ears, hands, feet, and tummy. She has a pink fleece nose and white yarn hair tuft. The old balloon logo is embroidered on the left foot. She is wearing a matching removable dress with lace collar.

My oldest daughter (middle child) has struggled with ADHD her entire life, way back before it was a buzzword. While academically she managed to stay way ahead of the curve because of her IQ – socially and emotionally she suffered terribly. She got her Purple Puffy (as we call her) for Christmas in 1986 (I think – might have been 1987) from her Nana. From the moment she opened the package she was in love with this stuffed animal, and it has been her constant companion since then. It has seen her through adolescence, college, bad break-ups, losing loved ones and so much more. It was (or had been) the ONLY thing in her entire life that she NEVER lost. For anyone with an ADHD child – you know what a MIRACLE this is, and how very special a bond she had with Puffy.

She is now an accomplished grown woman, with a PhD and is a political science policy analyst. Not too long ago, she was attending a conference in LA and called me crying (which as independent as she is – is amazing in and of itself) that she had left Puffy in the hotel in LA, and she has had them looking, but to no avail.

I sat in stunned silence on the other end listening and thinking to myself – she still takes Puffy with her? She is a wonderful speaker and oozes self-confidence. I agreed to meet her that afternoon for lunch, as she really sounded as if she could use a hug – she did. We sat and reminisced about old times – and I realized that to me Puffy has always been her snuggle toy, but to her – in her difficult childhood and adolescence and now adulthood…Puffy was so much more. When I left, I vowed to find another Purple Puffy for my great kid.

If you have any contacts that could locate one, I would be forever indebted to you.

If you can help Melinda find this Fisher Price Puffalump Purple & White Cat Wearing a Dress, THIS SEARCH REQUEST IS NO LONGER ACTIVELY MANAGED. Please use Our FREE FACEBOOK GROUP, including the POST CODE #18068, Originally posted Saturday – 02/05/2011