We’ve helped Tara find this dog, but Celine is still looking for this dog. 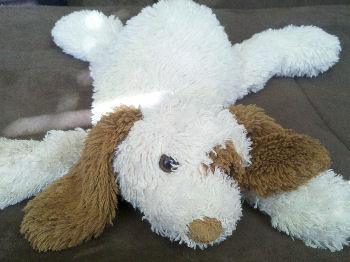 I’m looking for a shaggy, floppy ivory and medium brown Animal Alley puppy. He has an ivory body with medium brown floppy ears, nose,tail and a spot on his left eye. He is lying down and has beans in his belly. He is about 15 inches long.

My son received this floppy puppy when he was born in 2008, and he has been in love with it ever since. It has become his ”best friend”. His name is Woof Woof. I have even contacted Toys ‘R Us, but to no avail. There is no date on the tag – only a REG No.

He takes Woof Woof everywhere he goes. My son is 2 now and, as you can imagine, Woof Woof has been through a lot. He has had a few “surgeries”, and I have even washed him (very carefully).

The other day, he left Woof Woof at the grocery store. I was eventually able to find him, but that was a very bad few hours not knowing if we would be able to find him. My son was looking all over the house, calling for Woof Woof. It was heartbreaking. I know we may not be that lucky next time. I have been looking for a back up,” just in case” for the past few months. I have brought home many “impostors” but they just don’t measure up to the real Woof Woof.

Any help would be greatly appreciated, as I fear Woof Woof may not make it much longer.

Thank you so much!

If you can help Tara find this Animal Alley White & Brown Lying Down Dog with Eye Patch, THIS SEARCH REQUEST IS NO LONGER ACTIVELY MANAGED. Please use Our FREE FACEBOOK GROUP, including the POST CODE #18329,