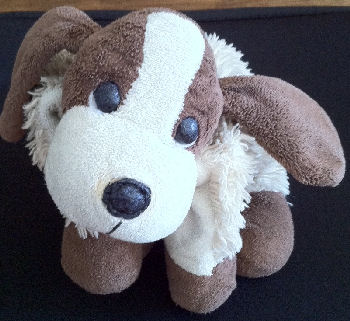 I am trying to find a 2007 plush toy dog. He kind of reminds me of the pillow pets that you see in the stores now, only because he can lay out flat, or fold together to stand up. (A lot cuter I might add though!) His measurements I’d say are 12 inches wide when he is laying out flat. The tag was so worn with love, I cut it off, without thinking I might need to find another. The only thing I do know, is that my husband’s Aunt, who gave it to us, bought it at a Ralph’s grocery store in southern California. 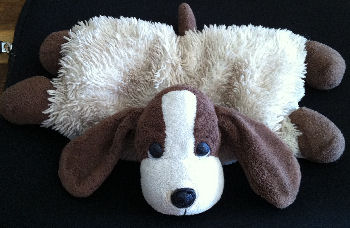 I hope that maybe you have a few more resources to finding stuffed animals, considering the countless hours I’ve tried without any luck!

Our household’s favorite dog is named Skid. My husband named him Skid, because it looks like he got run over! Out of all of the stuffed animals he has, this is THE dog. Luke, our son, is 3 1/2, and Skid the dog has to go everywhere with him. Luckily from the beginning, we’ve set limits. He can’t take him outside, or in stores, but he always has him by his side whether he’s playing cars, or blocks, Skid is watching. If he gets hurt the only thing that will help him is hugging Skid.

Even when we are at the park, and are petting a live dog, Luke will tell the owner that he has a dog, too. The owner will start asking me questions, of what kind he is, how big he is, and I always reply that he is stuffed, and the best dog to have, because we never have to feed him or clean up after him.

For as much as Luke loves this dog, and plays with him, he’s actually in pretty great shape. Other than he’s not really white anymore, and his stuffing that he did have is non-existent. His eyes look a little like the sewing is coming off around them. I wish I could remember what the tag said on him, before the writing wore off.

I even found another dog that is so similar with the way he lays flat, with the same coloring that I thought it could be a dog he would take on, but he casually threw him aside. We need a replacement, so when we can’t find him, or when I might need to send Skid to the doctor to be sewn up, we can transition smoothly. I would even take 3 or 4 of them to keep in a drawer if I could find them.

I can’t tell you how many times I have Googled a description of this plush toy. I’ve even called Ralph’s to ask them if they know the supplier that has sent them toys. I always miss the persons that I need to call, because they work the night shift and leave early in the morning. This dog is Luke’s life. He has to show him to whomever comes to our home.

Any help or direction in where I can look would be so wonderful.

Thank you for your time,

If you can help Denae find this 2007 White & Brown Pillow Pet Style Dog, THIS SEARCH REQUEST IS NO LONGER ACTIVELY MANAGED. Please use Our FREE FACEBOOK GROUP, including the POST CODE #18633,