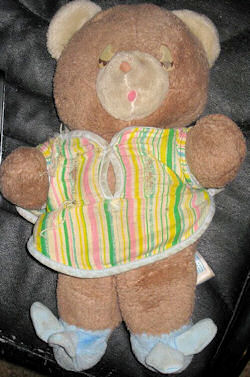 I’m looking for a 1982 AMTOY Bedtime Bear that originally was wearing a stripe nightshirt and stocking cap. I am looking for one with the nightshirt. I actually don’t care if he has a cap or not.

I’m looking for a replacement bear as mine is not holding up as much as it used to. I got him in ’83 when I was born. Hes spent the last 3 years with my daughter who loves him just as much as I did. But he’s old, he’s missing his hat, his nightgown is tattered, and he has a huge tear along the seam of his arm.

I’ve been looking all over for a replacement one that maybe is in a little better condition then mine, so my daughter doesn’t have to go without him when she sleeps, because she’s very attached to him.

If you can help Courtney find this 1982 AMTOY Bedtime Bear with Nightshirt & Cap, THIS SEARCH REQUEST IS NO LONGER ACTIVELY MANAGED. Please use Our FREE FACEBOOK GROUP, including the POST CODE #21582,