I’m looking for a 90’s Applause TIGER — crouching, with rusty brown with black stripes. Sadly, I don’t have pictures of him.

However, there are some clues! My younger sister had a “matching” snow leopard. The leopard’s fur 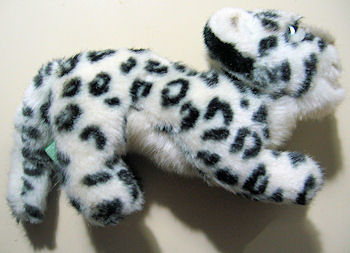 was a little shorter and coarser than my tiger. But overall that leopard is exact. The posture/position is correct, the shape of the legs is correct (no toes or even paws, really); the ears were just the same round shape with black on the back and Sandy was about the same size (anywhere from 9 to 11 inches long). The green tag under Leopard’s tail looks familiar too, which makes me think that my tiger was made as part of the World Wildlife Fund.

I believe it was sold at the San Diego Zoo somewhere between 1991-1994. Sandy and Leopard were presents from my uncle, and I remember thinking the name “Sandy” fitting for a boy tiger, because I named him after my best friend at the time, my dog, and the place he came from (San-DIego). Odd what you remember, isn’t it?

Sandy was given to me when I was only three or four, and I had him for twenty years before he got tangled up in the covers at a hotel. I didn’t notice he was missing until about ten hours later, at which point I called the hotel only for them to tell me that no tiger had been found.

I’m not a little kid any more, and I’ve survived almost three years without my tiger. But I still miss him very much. I have problems with depression and anxiety, and he was always around to help me feel better. Besides, I had him so long I got used to sleeping with him tucked into my arm, and I’ve never settled down quite as comfortably since he disappeared.

If anyone can give me any leads to one of these, it will mean the world. Thanks so much for your time and best of luck to others who are searching for their lovies.

He had white “fur” around his eyes, with black at the outer corner; his face had lots of stripes. He also had some kind of plastic, clear filament whiskers, and a pink plastic nose covered in a thin layer of velvety material. So any tiger not in that crouching pose, with no white patch around his eyes, and no whiskers is automatically out.

If you can help Haley find this 90’s APPLAUSE Crouching Tiger with Whiskers, THIS SEARCH REQUEST IS NO LONGER ACTIVELY MANAGED. Please use Our FREE FACEBOOK GROUP, including the POST CODE #080812-01