We now know this is a Kamar brand donkey. 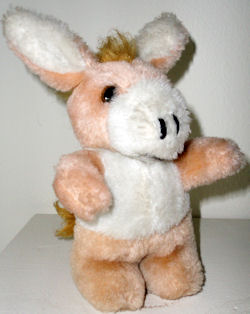 What a wonderful site. I am inspired to tell you my story. I am a child at heart, even though I’m 34 years old. Stuffed animals were my refuge from the pains of childhood. They were the friends I never had in real life. I lost my best “friend” in 1979 when I was 5.

My stuffed animal “lovie” was named Donkey Hoatie. Like Don Quixote, but simplified by my sister Laurel for my 5 year old kid mind.

He was a Christmas gift in 1978. I lost him at the Manx Hotel in San Fransisco- we gave him a bath and hung him up on the towel bar to dry. I forgot to pack him in the suitcase. I have no pictures, but remember him vividly- I’m constantly describing him to my girlfriend who has looked all over to replace him for me. No luck.

I think he was about 6-7 inches tall. He was a donkey or horse but standing as if he were a person- sort of. He was orange with a white tummy and mane. His ears stood straight up maybe with wire in them. He had a red hat maybe and was wearing a vest. He had a big snout which was also white at the front. I think he had brown pants. 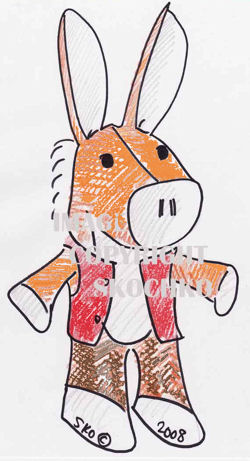 Here’s GT’s original drawing we had posted. He did a great job of rendering a lovie he hadn’t seen for almost 30 years , didn’t he!

If you can help GT find this 70’s Orange Donkey with White Tummy and Mane, Wearing Red Hat, Vest, and Brown Pants, THIS SEARCH REQUEST IS NO LONGER ACTIVELY MANAGED. Please use Our FREE FACEBOOK GROUP, including #101708-1,