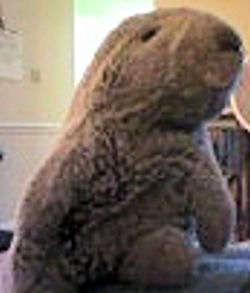 My boyfriend has a GUND stuffed animal from the 1980’s that he says (as does his mother) is a groundhog.

I am looking for one, since he has had his since he was about 3 years old, and I now have it with me (since he is in Florida and I have had it for a few years since he wanted someone to take care of it while he was at college).

His has a hole in it and is losing his beans…he is also a bit floppy…I know I can have it fixed, but I just want to know if there are other ones out there? He has been begging me to fix Shadow, and I plan on it, but I know it would be nice if he could have another one that he could have with him, while Shadow (the truly old man) is getting fixed.

We just had our 5 year anniversary, and I wasn’t able to really get him anything, and I know this would mean the world to him.

If you can help Jessi find this 80’s GUND Groundhog, THIS SEARCH REQUEST IS NO LONGER ACTIVELY MANAGED. Please use Our FREE FACEBOOK GROUP, including POST CODE #102808-11 in the subject